ORPHANS IN UKRAINE is a great team of dedicated people, who are truly on fire for Jesus and passionate about making a difference in the lives of children.

We are missionaries and pastors, teachers and prophets, musicians and cooks, writers and programers – all working together for the same purpose: to bring God’s love and salvation to Ukraine.

Pastor Vitaly was born into a Christian family in Rovno, Ukraine. In 1991 he graduated from Calvary Missionary school in Riga, Latvia; then in 2010 – from Russian Christian Humanitarian Academy, majoring in Religious Studies. In the summer of 1991, Pastor Vitaly and his wife Nadezhda moved to Novosibirsk, Russia. They arrived with a small, but dedicated, missionary team to preach the Gospel and plant a church, that was successfully built just a few months later, in December. It was the first Evangelical Church to open in Siberia after the Soviet Union had collapsed. Currently it is one of the biggest Evangelical Churches beyond the Ural Mountains with over a thousand members. For 25 years Covenant Church of Novosibirsk has been actively involved in street evangelism, ministering to addicts, people in prisons, human trafficking victims; supporting orphanages and home churches; holding regional conferences and partnering with the Christian satellite TV channel TBN-Russia to preach the Word and bring the Good News to the Russian-speaking audience in over 180 countries.

Pastor Vitaly’s greatest desire has always been preaching the Gospel to the lost and equipping men and women to be sent out into the mission field. So when in 2011 God called him, and Nadezhda, who serves alongside her husband, and their children to lead an apostolic ministry in Odessa, Ukraine, they have answered His call and started working to build churches, create disciples and reach the lost in this area of the world. As of 2016, the newly planted church in Odessa has over 70 members, dozens of orphans have found care and compassion in the House of Hope, where they reside and grow in their relationship with God. Pastor Vitaly’s and Nadezhda’s biggest dream is to open more houses just like that one, to minister to the orphans and help them grow into future leaders, spearheading the wave of Revival everywhere they go. 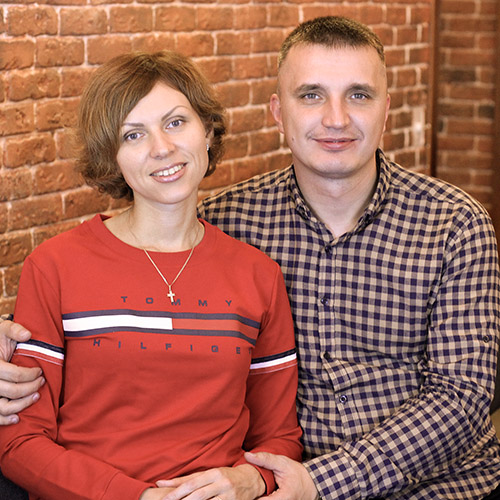 Petr started serving the Lord by helping out in his home church at the age of 14. After a few years he joined the Youth Ministry, started working with orphanages and leading small group Bible studies. Later he was ordained as a Deacon and served in an administrative capacity. Olga started attending a church at the age of 15, even though her parents were actively against her serving the Lord. In time God has soften their hearts, allowing Olga to join the Youth Ministry, the Worship Dance Team and to start serving in the orphanages. Petr and Olga got married in 2006 and 10 years later, in 2016, God called them to Ukraine to pastor the Covenant Church in Odessa. Since then through their faithful and prayerful ministry the Lord has been growing and forwarding His Kingdom, leading people to Christ, showering orphans with Love and healing broken hearts all around this beautiful city.

Copyright © Orphans in Ukraine
Orphans in UkraineNon-for-profit 501(c)(3) organization
This website uses cookies to improve your experience. We'll assume you're ok with this, but you can opt-out if you wish.Accept Read More